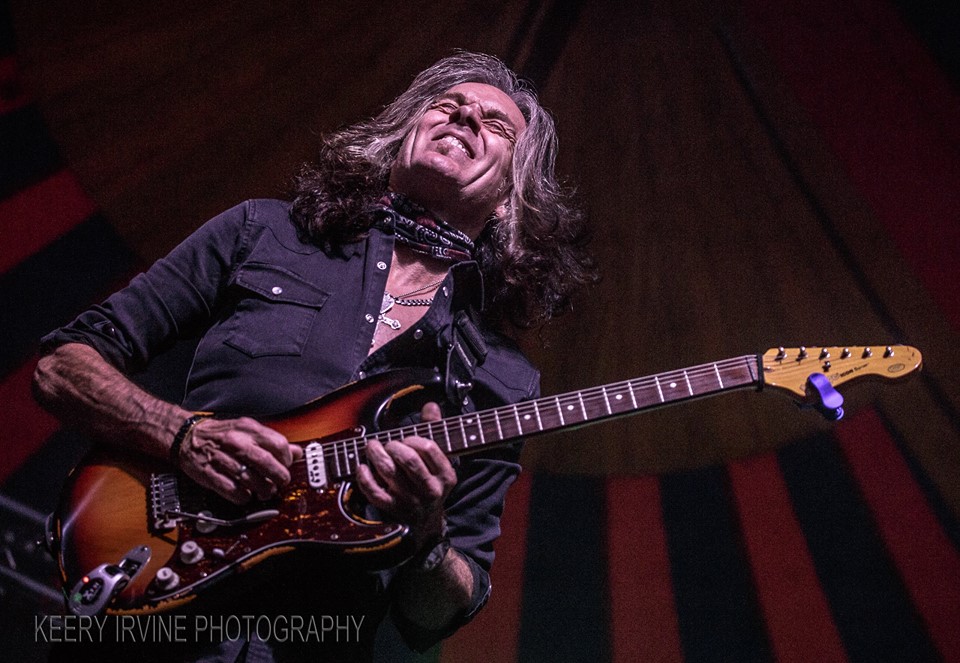 Irish guitar legend Pat McManus grew up in a family steeped in Irish Traditional music. His first instrument was the violin, which he started playing at the age of 4, but by 7 years of age he was also playing the acoustic guitar and making appearances with the family band and on national television. By the age of 14 years he had won the ‘All Ireland’ on the ‘fiddle’ in the adults category. Being a folk purist he had not really thought about rock n roll, but by the age of 18 his thoughts had changed and so he picked up the electric guitar.

Pat then formed what was to become ‘Mama’s Boys’ with his two brothers John and Tommy and they very quickly became an overnight hit around the clubs and ballrooms of Ireland. They then went on to tour the UK and Europe with ‘Hawkwind’, ‘Wishbone Ash’ and then were asked to support ‘Thin Lizzy’ on their farewell tour. This culminated in the band playing at the Reading Festival as an unsigned band, unheard of at this time… and it was there they were finally signed to a worldwide record deal with Jive/Arista. They went on to tour the world, working along side such bands as Bon Jovi, Ratt, Black Sabbath, Iron Maiden, Rush, Sting, Gary Moore, Scorpions, to name a few, both as support and headliners.

In 1994 Pat’s younger brother and Mama’s Boys drummer Tommy passed away. Pat and John felt they could no longer continue with the band and took some time out, returning with new band ‘Celtus’ in late 1995.The band was immediately signed by Muff Windwood to Sony Music and after recording their first CD ‘Moonchild’, they won rave reviews. In 1996 they won the Irish Music Award for best album, beating U2 and the Corrs etc. The band went on to record 4 more albums, toured extensively and fulfilled their ambition to play the Albert Hall, but in 2001 after a last show at the ‘Finsbury Park Fleadh’,Pat decided he wanted a break and to return to live in Ireland.

After his return to Ireland, Pat worked on several other artists’ albums, and was also writing for film and TV. He found himself involved in more traditional projects, which culminated in an appearance at the White House! He also joined up with two other bands ‘Indian’ and ‘The Painkillers’ both to play live and write and record.

In 2006 Pat felt he was ready to get back to his own project, so he started to put together the ‘Pat McManus Band’ and recorded his first solo Blues/Rock album ‘In My Own Time’. By 2007 the band was officially launched the band started touring and was in demand to do shows in Ireland, the UK and Europe. In 2008 Paul Faloon joined the band, with Marty McDermott joining some five years ago to complete what is now the quintessential line up. The band are continually in demand and some say one of the hardest working acts on the road. They have headlined 2 European Tours a year since 2007 and also played at many prestigious festivals. Highlights include supporting the Scorpions with audiences of up to 25,000 and so many great festivals throughout Europe from Norway to Corsica. There had been 3 more albums and three live DVDs and in the last year a fifth album ‘Blues Train to Irish Town’ and a new live CD have been released… and they are now touring their ‘Live Along The Highways 10th Anniversary Tour’.

Pat’s guitar and song writing has now made him one of Ireland’s rock and blues legends, and in the last few years he has been named in the top five Irish guitar players of all time. He is still affectionately known as the ‘Professor’, a name given to him back in the eighties because he was always willing to help young players and chat to fans about music and instruments…and that hasn’t changed as he still does that today. Pat along with Paul and Marty are very much in touch with their fans and certainly three gentleman of rock!

‘A master virtuoso of the six string’- Metal France
‘Eye watering guitar work’- Hot Press – Ireland
‘A lesson in guitar mastery’ – Blues Matters – UK
‘Fresher then half the blues prodigies out there’ – Classic Rock – UK
‘Virtuoso guitar playing’ BBC
‘Mo-nu-men-tal’ – Blues Magazine
‘The Professor came up with one of the greatest riffs of all of rock history.The lazy, sleazy, incredibly sexy signature to “Needle in the Groove” – Irish Independent

Pat’s career has also seen him record, write and collaborate with many other artists in many wide and diverse genres, such as Samantha Fox, Tricky from ‘Massive Attack’, John Parr, Spike from the Quireboys, Wishbone Ash, Smokie, Robyn Robbins from the Bob Segar Band and many others. Plus his music features on many film and TV programmes.